Skip to content
Facebook Twitter Instagram
We are greatly concerned about the uptick of antisemitic and other forms of hate crimes and violence in our country. We seek to ally with individuals, organizations, and congregations against these acts and towards a more just society.
Peace & Justice Center believes in human rights and dignity of all people. We support movements, and add our voices in solidarity, to groups who uphold this fundamental belief.
Actions (like joining the Boycott, Divest, and Sanction movement) that hold Israel accountable for acts of violence and oppression are not antisemitic, just like protesting police violence and human rights violations by the United States is neither anti-patriotic nor anti-police. Opposition to State acts of oppression by Israel are not the same as opposition to the the people of Israel and the Jewish diaspora. In fact, our society and others around the world are made more civil when people and organizations confront oppressive state actions.
In “Notes of a Native Son,” James Baldwin said, “I love America more than any other country in the world and, exactly for this reason, I insist on the right to criticize her perpetually.”
Women’s March Vermont is an organization whose work is aligned with the values of PJC and that we support through our Allied Group program. In March 2018 when the issue of Louis Farrakhan’s antisemitic, homophobic, and misogynistic statements emerged in relation to Women’s March (National) leadership, Women’s March Vermont quickly condemned those statements and sentiments [see screenshot below]. The national movement did this as well in a handful of press statements.
We  have received concern from community members about PJC’s role in asking the Vermont State Police to cancel their planned counter-terrorism training in Israel. PJC has worked in collaboration with other Vermont activist organizations – Migrant Justice, Justice for All, and the Vermont ACLU – towards fair and impartial policing statewide. To date most departments have not upheld the legal requirement to conduct annual fair and impartial policing trainings. It’s our opinion that they should prioritize fair and impartial policing and de-escalation trainings rather than anti-terrorism training.
We are deeply disturbed that false claims of antisemitism slow and inhibit opportunities to work collectively against the very real and scary antisemitism that is happening in Vermont, nationally, and internationally. Antisemitism is real — it harms us at the PJC; it harms us all. We all make knee-jerk reactions at times, but we implore our community of engaged community members and organizations to pause, research, and connect directly with us before spreading accusations as serious as calling PJC antisemitic. We, too, pledge to take positions deliberately and with respect for others in order to address conflict and difference nonviolently so that we can learn and grow together. The right wing is counting on us not to.
Peace & Justice Center appreciates input, feedback, and engagement in general. We welcome respectful, constructive, fact-based dialogue at all times. Please stay engaged and help us remain informed on the myriad challenges facing social justice and peace activist movements. We are stronger together.
Yours,
Rachel Siegel, Executive Director, on behalf of the board and staff of the Peace & Justice Center
Women’s March Vermont’s March 2018 response to anti-Semitic, homophobic, and misogynistic remarks: 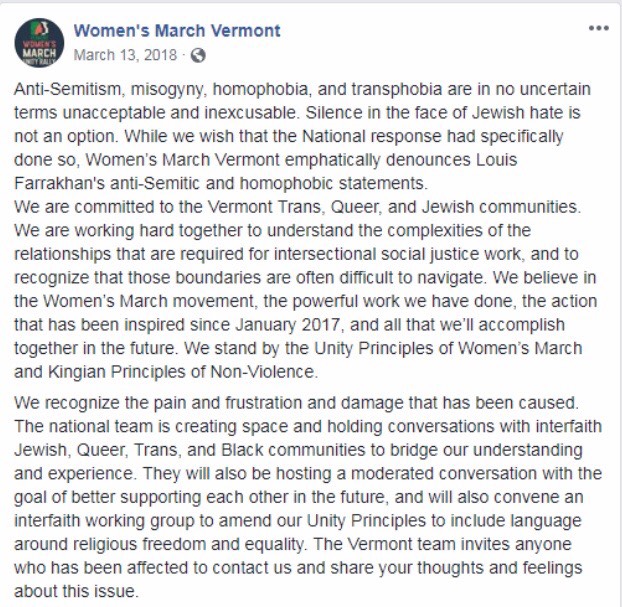