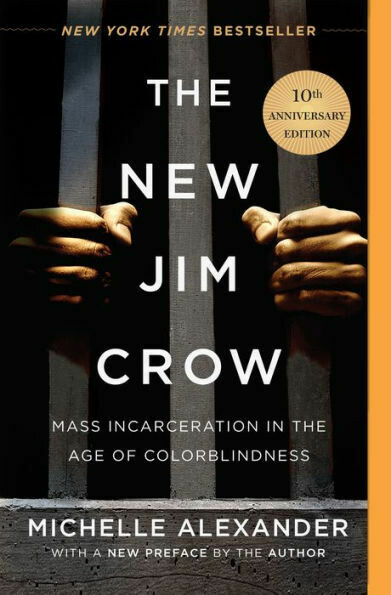 The New Jim Crow is a stunning account of the rebirth of a caste-like system in the United States, one that has resulted in millions of African Americans locked behind bars and then relegated to a permanent second-class status—denied the very rights supposedly won in the Civil Rights Movement. Since its publication in 2010, the book has appeared on the New York Times bestseller list for more than a year; been dubbed the “secular bible of a new social movement” by numerous commentators, including Cornel West; and has led to consciousness-raising efforts in universities, churches, community centers, re-entry centers, and prisons nationwide. The New Jim Crow tells a truth our nation has been reluctant to face.

As the United States celebrates its “triumph over race” with the election of Barack Obama, the majority of black men in major urban areas are under correctional control or saddled with criminal records for life. Jim Crow laws were wiped off the books decades ago, but today an extraordinary percentage of the African American community is warehoused in prisons or trapped in a parallel social universe, denied basic civil and human rights—including the right to vote; the right to serve on juries; and the right to be free of legal discrimination in employment, housing, access to education and public benefits. Today, it is no longer socially permissible to use race explicitly as a justification for discrimination, exclusion, and social contempt. Yet as civil-rights-lawyer-turned-legal-scholar Michelle Alexander demonstrates, it is perfectly legal to discriminate against convicted criminals in nearly all the ways in which it was once legal to discriminate against African Americans. Once labeled a felon, even for a minor drug crime, the old forms of discrimination are suddenly legal again. In her words, “we have not ended racial caste in America; we have merely redesigned it.”

Alexander shows that, by targeting black men through the War on Drugs and decimating communities of color, the U.S. criminal justice system functions as a contemporary system of racial control, even as it formally adheres to the principle of colorblindness.

The New Jim Crow challenges the civil rights community—and all of us—to place mass incarceration at the forefront of a new movement for racial justice in America.

Michelle Alexander is a highly acclaimed civil rights lawyer, advocate, legal scholar and author of The New Jim Crow: Mass Incarceration in the Age of Colorblindness — the bestselling book that helped to transform the national debate on racial and criminal justice in the United States. Since The New Jim Crow was first published in 2010, it has spent nearly 250 weeks on The New York Times bestseller list and has been cited in judicial decisions and adopted in campus-wide and community-wide reads, and has inspired a generation of racial justice activists motivated by Alexander’s unforgettable argument that “we have not ended racial caste in America; we have merely redesigned it.” The book has won numerous awards, including the 2011 NAACP Image Award for best nonfiction. Alexander has been featured in national radio and television media outlets, including MSNBC, NPR, CNN, Bill Moyers Journal, The Colbert Show, Real Time with Bill Maher, Tavis Smiley, Democracy Now!, and C-SPAN.

Over the years, Alexander has taught at a number of universities, including Stanford Law School, where she was an associate professor of law and directed the Civil Rights Clinic. In 2005, Alexander won a Soros Justice Fellowship that supported the writing of The New Jim Crow and accepted a joint appointment at the Kirwan Institute for the Study of Race and Ethnicity and the Moritz College of Law at The Ohio State University. Currently she is a visiting professor at Union Theological Seminary in New York City and a contributing opinion writer for The New York Times.

Prior to joining academia, Alexander engaged in civil rights litigation in both the private and nonprofit sector, ultimately serving as the director of the Racial Justice Project for the ACLU of Northern California, where she coordinated the Project’s media advocacy, grassroots organizing, and coalition building and launched a major campaign against racial profiling by law enforcement known as the “DWB Campaign” or “Driving While Black or Brown Campaign.”

Alexander is a graduate of Stanford Law School and Vanderbilt University. She has clerked for Justice Harry A. Blackmun on the U.S. Supreme Court and for Chief Judge Abner Mikva on the D.C. Circuit of the U.S. Court of Appeals.

Save this product for later
Display prices in: USD

Standard shipping anywhere in the USA.

Orders are sent out twice per week. You will receive tracking updates via email when your order is being processed.

Every product you consume is brought to you by human hands. From planting seeds or manufacturing, to packaging and imports, to the employee stocking shelves in your local grocery store. But what if you found out that those hands were being forced to work? What if your favorite chocolate company relies on child labor for harvesting their cocoa? Or that the factory workers sewing your clothes are harassed in their workplace? Or farm workers growing your food are fired for becoming pregnant?

Unfortunately, there is not a whole lot of accountability for large corporations that control industries of mass production.

This is why we are committed to providing alternatives to exploitative trade systems known for exploitation and human rights abuses.

In our retail and online store, our products reflect and support the mission of the Peace & Justice Center. Therefore, we focus on fair trade, local, and educational products. We partner with small producers in the Global South, and actively work to cultivate long-term trading relationships as a way to alleviate poverty, ensure human rights, and protect the environment.